7 When Ahaz son of Jotham, the son of Uzziah, was king of Judah, King Rezin of Aram and Pekah son of Remaliah king of Israel marched up to fight against Jerusalem, but they could not overpower it.

2 Now the house of David was told, “Aram has allied itself with[a] Ephraim”; so the hearts of Ahaz and his people were shaken, as the trees of the forest are shaken by the wind.

3 Then the Lord said to Isaiah, “Go out, you and your son Shear-Jashub,[b] to meet Ahaz at the end of the aqueduct of the Upper Pool, on the road to the Launderer’s Field. 4 Say to him, ‘Be careful, keep calm and don’t be afraid. Do not lose heart because of these two smoldering stubs of firewood—because of the fierce anger of Rezin and Aram and of the son of Remaliah. 5 Aram, Ephraim and Remaliah’s son have plotted your ruin, saying, 6 “Let us invade Judah; let us tear it apart and divide it among ourselves, and make the son of Tabeel king over it.” 7 Yet this is what the Sovereign Lord says:

10 Again the Lord spoke to Ahaz, 11 “Ask the Lord your God for a sign, whether in the deepest depths or in the highest heights.”

13 Then Isaiah said, “Hear now, you house of David! Is it not enough to try the patience of humans? Will you try the patience of my God also? 14 Therefore the Lord himself will give you[c] a sign: The virgin[d] will conceive and give birth to a son, and[e] will call him Immanuel.[f]15 He will be eating curds and honeywhen he knows enough to reject the wrong and choose the right, 16 for before the boy knows enough to reject the wrong and choose the right, the land of the two kings you dread will be laid waste. 17 The Lordwill bring on you and on your people and on the house of your father a time unlike any since Ephraim broke away from Judah—he will bring the king of Assyria.”

The Genealogy of Jesus the Messiah

1 This is the genealogy[a] of Jesus the Messiah[b] the son of David, the son of Abraham:

2 Abraham was the father of Isaac,

Isaac the father of Jacob,

Jacob the father of Judah and his brothers,

3 Judah the father of Perez and Zerah, whose mother was Tamar,

Perez the father of Hezron,

Hezron the father of Ram,

4 Ram the father of Amminadab,

Amminadab the father of Nahshon,

Nahshon the father of Salmon,

5 Salmon the father of Boaz, whose mother was Rahab,

Boaz the father of Obed, whose mother was Ruth,

Obed the father of Jesse,

6 and Jesse the father of King David.

David was the father of Solomon, whose mother had been Uriah’s wife,

7 Solomon the father of Rehoboam,

Rehoboam the father of Abijah,

Abijah the father of Asa,

8 Asa the father of Jehoshaphat,

Jehoshaphat the father of Jehoram,

Jehoram the father of Uzziah,

9 Uzziah the father of Jotham,

Jotham the father of Ahaz,

Ahaz the father of Hezekiah,

10 Hezekiah the father of Manasseh,

Manasseh the father of Amon,

Amon the father of Josiah,

11 and Josiah the father of Jeconiah[c] and his brothers at the time of the exile to Babylon.

12 After the exile to Babylon:

Jeconiah was the father of Shealtiel,

Shealtiel the father of Zerubbabel,

13 Zerubbabel the father of Abihud,

Abihud the father of Eliakim,

Eliakim the father of Azor,

14 Azor the father of Zadok,

Zadok the father of Akim,

Akim the father of Elihud,

15 Elihud the father of Eleazar,

Eleazar the father of Matthan,

Matthan the father of Jacob,

16 and Jacob the father of Joseph, the husband of Mary, and Mary was the mother of Jesus who is called the Messiah.

Joseph Accepts Jesus as His Son

18 This is how the birth of Jesus the Messiah came about[d]: His mother Mary was pledged to be married to Joseph, but before they came together, she was found to be pregnant through the Holy Spirit.19 Because Joseph her husband was faithful to the law, and yet[e] did not want to expose her to public disgrace, he had in mind to divorce her quietly.

20 But after he had considered this, an angel of the Lord appeared to him in a dream and said, “Joseph son of David, do not be afraid to take Mary home as your wife, because what is conceived in her is from the Holy Spirit. 21 She will give birth to a son, and you are to give him the name Jesus,[f] because he will save his people from their sins.”

22 All this took place to fulfill what the Lord had said through the prophet: 23 “The virgin will conceive and give birth to a son, and they will call him Immanuel”[g] (which means “God with us”).

24 When Joseph woke up, he did what the angel of the Lord had commanded him and took Mary home as his wife. 25 But he did not consummate their marriage until she gave birth to a son. And he gave him the name Jesus. 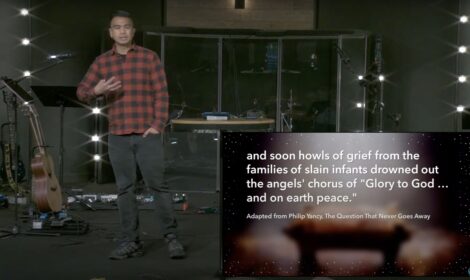